Today I have finally released my first fat pack. It is called Left & Right Recline fatpack. As promised, it is a pack of two, Left Recline & Right Recline. I'm not good at photo editing so I took a picture of the boxes stacked on top of each other. I know, it's so elementary but I haven't had time to improve my image manipulation skills. I am still honing my animation skills.It can be time consuming. I'm a mild perfectionist so I work and tweak a pose or animation until I feel satisfied with it. It annoys me when I see poses from bigger companies and the limbs just look a bit weird. So I decided long ago that I would not be like that. If that means I have to upload and re-upload a few times, then so be it. As a result, I don't release stuff often. When I do though, you can expect it to look nearly perfect.

The fat pack is available at my marketplace page: https://marketplace.secondlife.com/p/Left-Right-Recline-Fatpack/3728608

My second bit of news is that my friend, Julio Khaos, has come out with a new line of poses. It is called Julio's Creations. He is quite proud of it. I will help him, so I will blog about his new releases. His first pose is  called Casual Guy Pose. He wants to create poses and animations for guys in SL. So many of the poses I have seen are for women. There are not nearly as many male poses as female poses. 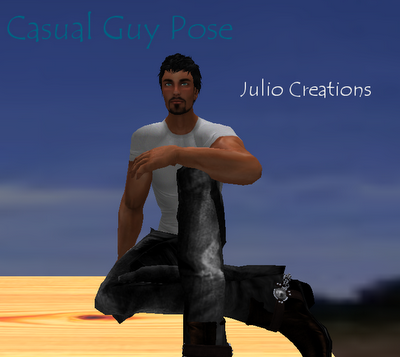 He has not set up any vendors inworld, but he does have a marketplace page. It is here: https://marketplace.secondlife.com/p/Casual-Guy-Pose-boxed/3722754  .

Well, that's all my news for now!

Have fun and enjoy the art!

Go Back To This Site