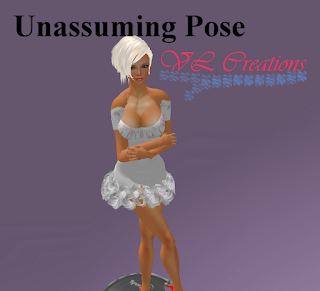 Days ago I released it at most of my stores. It's not at The Bottoms sim. That store is under construction. I am redecorating my stores though.

I can't seem to attach pics.

It's a standing pose. Arms crossed and one leg crossed over the other.

It's a fun photo pose. I put it in my pose stands. I hope to eventually have one pose stand to sell with all the poses in it to be used with a photo studio.

There are so many out there, I know. But I could just make the poses.

I'm also thinking of an AO. I took an AO class at NCI. But we'll see.

Have a great weekend!